After being the exclusive property of teams based in Toronto and Hamilton, the Grey Cup championship became a truly national event in 1921. The Western Canada Rugby Football Union joined the Canadian Rugby Union and the Edmonton Eskimos were the first western team to challenge for the trophy. 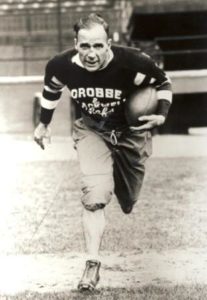 Toronto’s Lionel Conacher, appearing in his only Grey Cup final, made the most of his opportunity, tying Husky Craig’s 1913 record of 15 points. Conacher was named Canada’s male athlete of the half century for his all-around ability in football, hockey, baseball, soccer, lacrosse, track and boxing.

The Eskimos were no match for the experienced Argonauts, as Toronto earned the first shutout in Grey Cup history. The Argonauts were a dominant team going undefeated in nine regular season and playoff games. Toronto outscored the opposition 226 to 55.

The Eskimos, on the other hand, had several American college players on their roster that had trouble adjusting to the different rules of the Canadian game. They were repeatedly penalized for interference against the Argonauts.

Shortly following the opening kickoff, the Eskimos botched a punt attempt, giving the Argonauts great field position. George Shieman snapped the ball over the punter’s head, which the Eskimo’s recovered, but lost the ball on downs. With the Argonauts on the Edmonton three-yard line, Shrimp Cochrane ran the ball around the end and across the goal line for a touchdown.

The Argonauts scored their second touchdown on a combination extension play on another misplayed punt by the Eskimos. Gordon Britnell lateraled the ball to Harry Batstone, who then lateraled to Conacher who ran it in for the touchdown.

Edmonton’s best opportunity for a touchdown came in the second half when Miles Palmer exploded for a 25-yard touchdown. But the Eskimos were penalized for illegal interference, and on the next play Alex Romeril stripped the ball from an Edmonton carrier to negate the scoring chance.

Conacher broke a number of tackles for his second touchdown in the third quarter to go along with his field goal and two rouges. Conacher didn’t stick around to see the end of the game, as he left Varsity Stadium before the start of the final quarter to play hockey with his Toronto Aura Lee club.