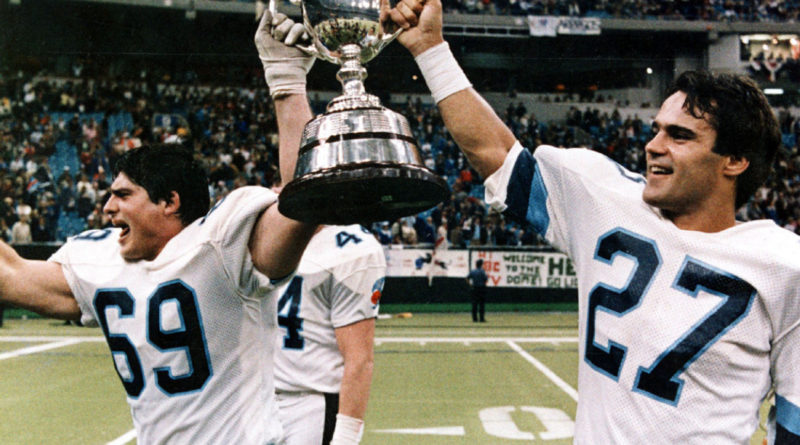 The 1983 Grey Cup marked the first championship game where weather was not a deciding factor, as the final was held indoors for the first time at the new BC Place Stadium in Vancouver.

Most notably, however, 1983 marked the end of what was at the time the longest championship drought in the modern era of Canadian football. The Toronto Argonauts, winners of a record 10 Grey Cups, had not sipped from the silver chalice since 1952.


The Argos faced a difficult task. Not only were they opposing the BC Lions with a partisan crowd behind them, but Toronto’s star quarterback Condredge Holloway was battling the flu. He did manage, however, to complete a 14-yard touchdown toss to Jan Carinci in the second quarter.

Trailing 17-7, Toronto coach Bob O’Billovich elected to go with Joe Barnes at pivot in the second half. Slowly Barnes got the Argos offence going, only to be negated when Hank Ilesic missed on three field goals. Two were good for singles, however, as Toronto cut its deficit to eight.

When Ilesic finally split the uprights on a 43-yard attempt in the fourth quarter, it put the Argos within striking distance. Then with four minutes remaining, Barnes executed one of the most important drives in Argonauts history. He hit Paul Pearson with a pass at the BC 45, but the ball popped loose into the air. It was another famed Argo bounce, as Emanuel Tolbert caught the ball to keep the drive alive.

Barnes went to work again, throwing to Tolbert at the BC 25 and another pass to Pearson on the three. With 2:44 left in regulation, Barnes flipped to Cedric Minter in the end zone, giving the Boatmen their initial lead of the game. But the Argos failed on the two-point attempt.

Leading by one, Toronto forced BC to punt on its next possession, allowing the Argos to run out most of the clock. BC’s Roy Dewalt had one last chance to throw a Hail Mary pass on the final play, but his prayer wasn’t answered, as long suffering Argos fans went into the streets in jubilation.