In the 2003 Grey Cup Championship Game Montreal coach Don Matthews surprised many experts by playing rookie cornerbacks D.J. Johnson and Brandon Williams. Williams got the call in place of an injured Omar Evans, while Johnson started because in place of Wayne Shaw, because Matthews felt Johnson was better in man-to-man coverage. Even though the inexperience of his young cornerbacks may have cost him the game, Matthews made no apologies for sticking with Williams and Johnson.

After Edmonton running back Mike Pringle opened the scoring with a four-yard TD run on the opening drive, Edmonton took a commanding 14-0 lead in the second quarter when Ray connected with Tucker on a 41-yard touchdown pass, capping a four-play, 70-yard drive.

Ben Cahoon made a spectacular, one-handed catch in tight coverage to put the Alouettes on Edmonton’s four-yard line. Montreal called an unusual option play when Anthony Calvillo pitched the ball to running back Deonce Whitaker who tossed a four-yard touchdown to a wide-open Pat Woodcock.

On Edmonton’s next possession, Pringle fumbled, and Montreal went straight to work, as Calvillo hit Silvain Girard on a 32-yard TD pass to tie the game. After a Keith Stokes fumble later in the quarter, Ray hooked up with a streaking Tucker with 1:23 left in the quarter on a 20-yard TD passing play, restoring the Eskimos’ seven-point advantage.

Montreal struck back on the next drive. Calvillo threw a 27-yard TD to Cahoon with 50 seconds left in the half to tie the score at 21-21, but Edmonton took a 24-21 lead into the intermission when Sean Fleming connected on a 27-yard field goal following another Stokes fumble deep in Montreal’s half.

The Eskimo defence took over in the second half, holding Montreal to a single point in the third quarter, while Ray scored early in the fourth quarter on a one-yard run to give the Eskimos a 31-22 lead. The turning point in the game came one play earlier when a Montreal fumble recovery was negated by an offside call on D.J. Johnson, sapping the life out of the Alouettes.

Fleming booted a 27-yard field goal with 29 seconds left to seal the victory for Edmonton. 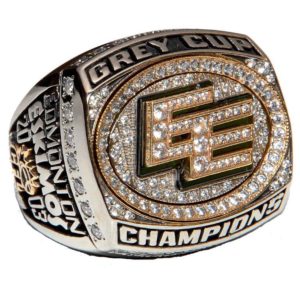