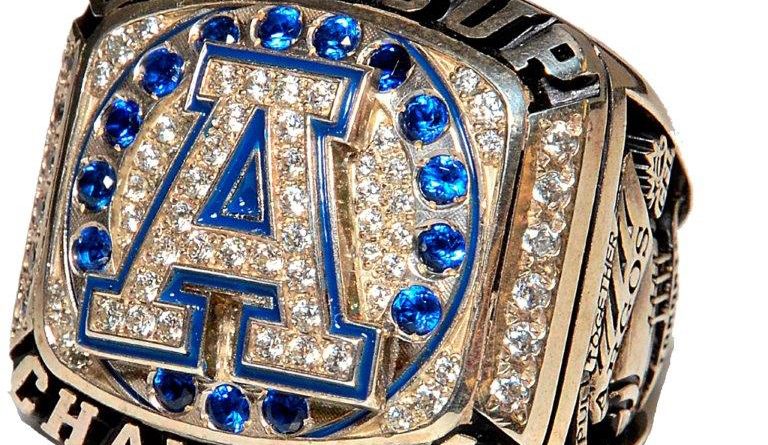 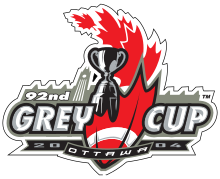 The BC Lions took the opening kickoff and fashioned an impressive drive that started and ended with a Jason Clermont reception. Quarterback Dave Dickenson was perfect on a series of short precision passes, taking the Lions from their own 38-yard-line down the field for a touchdown and an early 7-0 lead. The scoring play was a 12-yard toss to Clermont on a play fake that drew away the Toronto defence, which looked bewildered on the whole series.

Toronto nearly hit a field goal later in the quarter, but a flag was thrown on Noel Prefontaine’s 39-yard attempt. The subsequent kick from 47 yards missed, leaving BC pinned near its own goal line.

But Dickenson engineered a series of first downs as the quarter wound down, moving the Lions to midfield with help from receivers Geroy Simon and Ryan Thelwell and a nine-yard carry by Antonio Warren. Duncan O’Mahony punted as the quarter ended, angling the ball out of bounds at the Argos’ 21-yard line. Overall, BC had the ball in their possession a whopping 11 minutes in the opening 15.


Damon Allen failed to ignite the Argos offence early in the second quarter, despite two quick chances thanks to a punt return fumble by Aaron Lockett of the Lions. On the second of two Noel Prefontaine punts, Lockett held on to the ball and ran BC to its own 50-yard line. But the Lions couldn’t move the ball. Trying to avoid dangerous punt returner Bashir Levingston, BC kicker Duncan O’Mahony angled his punt out of bounds for only nine yards, giving Toronto good field position.

A long completion from Allen to R. Jay Soward moved the Argos to the BC 20, and a 27-yard field goal by Prefontaine put Toronto on the board.

Allen began to find his receivers on Toronto’s next drive, hitting Robert Baker for a 35-yarder and a 20-yarder to move inside the Lions’ red zone. A pass interference call against the Lions then put the ball at the 1-yard line, and Allen plunged across for the touchdown and the Argos’ first lead.

BC responded immediately, getting into field goal range on a Jason Clermont catch from Dave Dickenson. Duncan O’Mahony hit a 42-yarder to draw the Lions even. But just before the half, Allen again connected with Baker for a 23-yard touchdown.

The field-position advantage enjoyed by the Toronto Argonauts in the second quarter continued on the opening drive of the second half, as Allen got the ball at midfield. Allen moved the ball efficiently again, and for the second time in the game dove for a one-yard touchdown to give the Argos a 14-point lead.

Dave Dickenson had some success moving the ball for BC, but the Lions could only muster a 36-yard field goal by Duncan O’Mahony.

On Toronto’s next possession, Allen went down with an apparent leg injury while running for a first down. Ironically, the play was called back on a holding penalty. Michael Bishop replaced Allen at quarterback while the 41-year-old received treatment on the bench.

The Lions defence got its best pressure of the game on Bishop early in the fourth, forcing an errant pass then nearly causing a fumble on the next play.

Dave Dickenson took over for the Lions at his own 10-yard line, and engineered an impressive drive. Lyle Green caught two passes for first downs before running back Antonio Warren took over. Warren ran for 30 and 15 yards, setting up a Lions touchdown on Dave Dickenson’s five-yard rush and dive into the end zone. Two consecutive time-count violations on a two-point conversion attempt pushed Duncan O’Mahony back for a 22-yard convert attempt that went wide.

Damon Allen returned to the game for the Argos, and was promptly decked as he tried to pass by a charging Barrin Simpson.

Dickenson just missed a streaking Geroy Simon’s outstretched hands to stop the next BC drive, and Toronto took over again with a short field.

Allen found Tony Miles wide open and pushed down to the Lions’ 10-yard line with the clock at three minutes and counting. Noel Prefontaine pushed the Argos’ lead to eight points on a short field goal.

BC failed to move the ball on what would turn out to be its last chance with the ball, Dickenson just missing the outstretched hands of Simon on a bomb attempt.

With the ball back, the Argos got two crucial first downs and wound down the clock to win the game and their 15th Grey Cup. 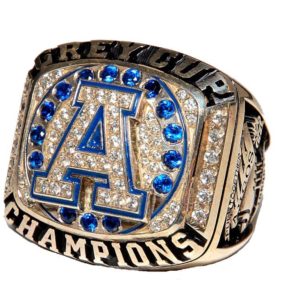