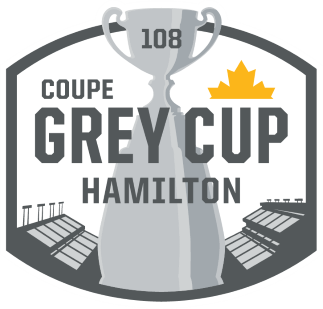 The 108th Grey Cup decided the Canadian Football League (CFL) championship for the 2021 season. The game was played on December 12, 2021, between the defending Grey Cup champion Winnipeg Blue Bombers and the Hamilton Tiger-Cats, at Tim Hortons Field in Hamilton, Ontario. The Blue Bombers defeated the Ticats 33–25 for their second title straight, making them the first team in 11 years to do so. This game was also the fourth Grey Cup to go into overtime. The other three instances came in 1961, 2005 and 2016

The game was played in windy conditions, with gusts of nearly 50km/h. Winnipeg won the coin toss, but elected to defer, choosing to play with the wind at their backs in the first and the fourth quarters. Winnipeg used the wind to their advantage in the first quarter, with two field goals and a single, while Hamilton was limited to seven net offensive yards, the lowest scoring opening quarter of a Grey Cup since 2008. Hamilton replied in the second quarter with a field goal and a twelve-yard touchdown just before halftime, giving them a 10–7 lead.

In the third quarter, Winnipeg managed to kick a 15-yard field goal into the wind to tie the game. Hamilton then went for it on third down and was stopped, forcing a turnover on downs, but their aggression was rewarded with a 43-yard interception by Hamilton defensive back Kameron Kelly. Hamilton quarterback Jeremiah Masoli threw an 11-yard touchdown on that same drive to make the score 17–10. Winnipeg conceded a safety near the end of the quarter to fall behind 19–10, and early in the fourth quarter Hamilton kicked a 10-yard field goal to go up 22–10.

When Winnipeg got the wind back in the fourth quarter, the game began to turn around. Winnipeg kicker Sergio Castillo kicked a 20-yard field goal, and then Winnipeg quarterback Zach Collaros threw a 29-yard touchdown. With 1:52 left in the game, Castillo kicked his fifth field goal of the game, from 45 yards away, to give Winnipeg a 24–22 lead. He kicked a single on the following kickoff to make it a 25–22 lead. Hamilton responded by driving all the way down the field, nearly scoring a touchdown before settling for a 13-yard field goal with four seconds left to tie the game.

In overtime, Winnipeg drove down the field and Collaros threw a 13-yard touchdown, and made the two-point conversion to make it 33–25. Then, on Hamilton’s ensuing position, Winnipeg linebacker Kyrie Wilson intercepted a deflected pass from Masoli, ending the game. Winnipeg quarterback Zach Collaros was named the most valuable player, while Winnipeg receiver Nic Demski was named the top Canadian. Winnipeg became the first team to win back-to-back Grey Cups since the Montreal Alouettes in 2009–10, and Winnipeg won back-to-back Grey Cups for the first time since 1961–62. Hamilton extended the longest active Grey Cup drought in the CFL to 22 years.