It’s been a rough start to the CFL season for the reigning Grey Cup champions, with the Ottawa Redblacks going 1-3-1 through their opening five games, losing by just seven points combined. Then again, the Redbacks managed to make history last season by performing in such a manner – becoming the first team in CFL history to win their division with a losing record.

Ottawa doesn’t necessarily need to perform particularly well through the regular season, so long as they make it to the playoffs as that’s where they become a different animal altogether. However, much more was expected from the Redblacks by this stage, and they should aim to turn their sorry record around, but can they do so?

Offseason hinted to success in 2017

The Ottawa Redblacks came out of the offseason and into the start of this new campaign with a few bumps and bruises but were overall better off. Ernest Jackson – winner of the Most Outstanding Player Award in the 104th Grey Cup – was by far the hottest property in the free agency and, unfortunately for Ottawa, his services could not be retained by the reigning champions.

With the loss of Jackson, the Redblacks did well to add top talents from the free agency with the likes of Greg Ellingson, Nolan MacMillan, Kenny Shaw, and Diontae Spencer all re-signing or joining in the winter. Trevor Harris was also established as the team’s starting quarterback, and he’s settled in well with the 31-year-old already topping the passing stat column with 71.4 passing percentage and a mighty 1755 yards for ten touchdowns in just five games.

The Redblacks were expected to improve on their losing record of last season greatly, and to their credit, they’ve been in games to the bitter end. They simply need to learn how to close out the contests, as they did against Montreal in their first win of the season in their fifth game.

Can the Redblacks bring it back? 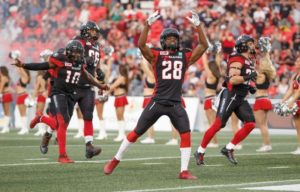 First things first, the Ottawa Redblacks need to build on their first win with another triumph, and they’ll need to do so on the field of the indifferent Toronto Argonauts.

The Argonauts top the East Division but have but one more win than Ottawa, hosting a 2-2-0 record – one win at home and one win away. The Redblacks come into the contest as the underdogs at +130 with the latest odds on bet365, but perhaps don’t deserve to be at such long odds providing that they can follow up their smashing 30-20 win from their lone visit to BMO Field last season.

Hopefully, the win against Montreal has helped the Redblacks to overcome whatever was inhibiting them in the first four matches. They will most certainly want to create some momentum as Ottawa has a tough schedule ahead – facing two West Division giants in the next four games.

While they didn’t start the season how they wanted to, the Ottawa Redblacks have a win under their belt and look ready to overcome the odds to defeat the Toronto Argonauts. After that, Ottawa will continue to pursue a positive record and be in good standing for the playoffs.