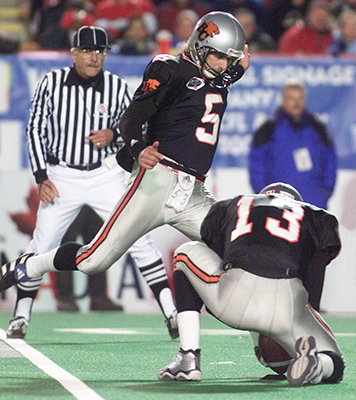 There’s a yard between the ball and the defensive line. You know the snap count and they don’t. On third and short, you give the ball to your biggest horse or let the quarterback dive, and if you don’t get the yard, somebody’s butt should be in a sling.

But on third and short, third and a yard-and-change, the B.C. Lions twice spat in the eye of conventional wisdom and sent Robert Drummond off tackle. Bad move. Risky move. Great way for a coach to spend the winter being second-guessed, especially with both coming in the fourth quarter.

The first time, Drummond found a seam and zipped 44 yards for a touchdown that gave the Lions a 19-10 lead. The second, he went 14 yards to keep a drive going that ended in Damon Allen’s one-yard plunge that made it 25-13.

In both instances, Sean Millington threw the block that gave him the seam and Simon Boffoe kept it open with great blocks on cornerback Davis Sanchez.

Had they not been called, had Steve Buratto gone with the plunge for the yard, who knows if they’d have continued the drives for touchdowns? And in a game decided by two points, 28-26, who knows if the B.C. Lions would have rushed off the field waving the Grey Cup or watched the Montreal Alouettes take it the other way?

Buratto had a simple explanation: The Lions matched up very well physically on the outside and besides “anybody who lets Robert get outside is in trouble because he can turn the corner as well or better than anybody in this league. They were determined to keep us from running up inside. So we went outside.”

But there’s another way of looking at it, a way that explains it perfectly: The Lions have been unconventional all year. They spent the first half of the season bickering and bitching and finding excuses for losing and the last five games running roughshod over the teams billed as the best in the league: Edmonton, Calgary and now Montreal — bing, bang, boom.

They’ve survived one coach and learned to love another, all in the space of 14 games.

Why on earth would they do it the easy way now?

There are all sorts of reasons why they own the Grey Cup today and a very good Montreal team with an exceptional coach is flying home empty. Reasons like Buratto with his laid-back discipline and football mind, a defensive genius named Rich Stubler, a quarterback-turned-magician named Damon Allen, who almost always found ways to keep the crucial drives going.

And the two guys who sat at the interview table with Buratto: Millington and Drummond, the league’s biggest set of two running backs and arguably two of its four or five best.

They have a history, these three.

In 1994, Buratto stood on the sidelines as assistant coach watching Millington run wild as the Lions beat Baltimore to win the Grey Cup on a last-play field goal by Lui Passaglia.

Baltimore had a horse of a back of its own named Robert Drummond, who on this day couldn’t quite get it done.

When the game ended, Passaglia was named the MVP and Millington the outstanding Canadian.

The announcement was made on national television. Then “after the whining,” Millington grins, “the vote was recounted and Baltimore running back Karl Anthony was suddenly MVP, Lui was dropped to outstanding Canadian and Millington was out in the cold.

There was no recount yesterday. Slotback Don Blair, whose tirade after a loss to Winnipeg triggered the explosive team meeting that blew the problems aside, had a great game and, on another day, might have won it.

“We believed,” Drummond said. “Nobody else did, but we believed.”

All season, a guy asked? 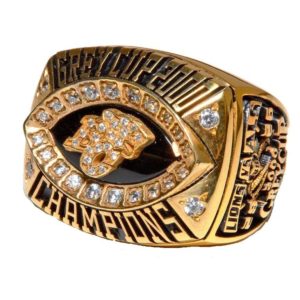