The 98th Grey Cup was a Canadian football game played between the Eastern Division champion Montreal Alouettes and Western Division champion Saskatchewan Roughriders to decide the champion of the Canadian Football League (CFL) for the 2010 season. In a rematch of the 97th Grey Cup, the Alouettes defeated the Roughriders for the second year in a row, 21–18, becoming the first team in 13 years to win back-to-back Grey Cups.

The game was played on November 28, 2010, at Commonwealth Stadium in Edmonton, Alberta. This marked the first time that the Grey Cup was played in the province of Alberta in two straight years. (Calgary hosted the previous Grey Cup game.)

The Montreal Alouettes came into the game hoping to become the first team to repeat as Grey Cup Champions since the 1996–97 Toronto Argonauts, while the Saskatchewan Roughriders were trying to avenge their last-second loss to Montreal in the previous year’s Grey Cup. Anthony Calvillo demonstrated that he was one of the best quarterbacks in the CFL by passing for over 300 yards for the second consecutive Grey Cup game, in leading his Alouettes to back-to-back Grey Cup championships. Jamel Richardson and S.J. Green each had over 100 yards receiving. Avon Cobourne had a strong game for the Alouettes, scoring two touchdowns, including what turned out to be the winning touchdown.
The Alouettes opened up a 7-0 lead 5:39 into the first quarter on a three-yard run by Cobourne as the Riders were pinned deep for most of the opening 15 minutes. Then Duval missed a 31-yard field goal, wide right, scoring a single point to make it 8-0 Montreal at 11:14. The momentum seemed to shift from that point on. A pass interference call on Chip Cox in the Alouettes’ end zone gave Saskatchewan a first-and-goal on the Montreal 1-yard line, and Wes Cates scored a touchdown to end the first quarter, with the Alouettes leading 8-7.

One of the key plays of the game happened with 11:06 left in the third quarter, when Marc Trestman gambled on a 3rd-and-2 with a fake punt on the Montreal 41-yard line. The direct snap went to receiver Eric Deslauriers, who ran ten yards for the first down, and that play helped set up a 22-yard Damon Duval field goal to tie the game 11–11 with 5:35 left in the third quarter.

With 13:23 remaining in the fourth quarter, Damon Duval kicked a 42-yard field goal to put the Alouettes up 14-11. On a 2nd-and-5 play scrimmaging from the Saskatchewan 52-yard line with 9:37 left in the fourth quarter, Byron Bullock appeared to intercept an Anthony Calvillo to Ben Cahoon pass attempt. However, Bullock committed pass interference on Ben Cahoon, which nullified the interception, and resulted in a ten-yard Saskatchewan penalty and a first down for the Alouettes. Later during that same Alouettes’ drive, on a 2nd-and-7 from the Saskatchewan 40-yard line, Calvillo successfully threw to Jamel Richardson who was in tight coverage by Roughriders’ cornerback Omarr Morgan on the Saskatchewan 2-yard line. Avon Cobourne scored on a 2-yard touchdown run to put the Alouettes up 21-11 with 7:46 left in the 4th quarter.

The Riders replied by driving down the field, capped by Darian Durant’s 1-yard touchdown pass to Marc Parenteau 3:28 left in the 4th quarter to make the score 21-18. On the ensuing Alouettes’ drive, with 2:49 left in the 4th quarter and the ball on the Alouettes’ 40-yard line, Calvillo completed a pass-and-run play to fullback Quincy Carter down the left sideline that took the ball to the Roughriders’ 36-yard line. Damon Duval’s 40-yard field goal attempt missed wide right.

The Alouettes’ defence, which had sometimes looked ordinary during the last few weeks of the regular season, came up big in the Grey Cup Final. Darian Durant had an ordinary day passing for only 215 yards after leading the league in passing during the regular season. The Alouettes’ defence limited Durant and the Roughriders to one touchdown pass, one running touchdown, a single and a field goal, as they kept Durant in check to help them win their second straight Grey Cup, and third win of the decade, ensuring the Alouettes’ place in history as the first dynasty of the 2000s.

For Anthony Calvillo, Scott Flory, Anwar Stewart, and Ben Cahoon it was their third Grey Cup together as they were all on the Alouettes’ 2002 Grey Cup Championship team, and a fourth for Stewart who won his first in 2001 with the Calgary Stampeders a year before joining the Alouettes. 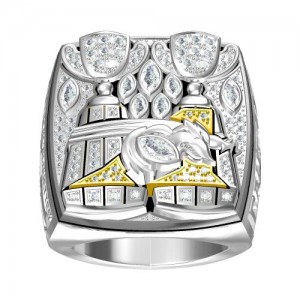