The game took place on November 24, 2013, at Mosaic Stadium at Taylor Field in Regina, Saskatchewan. It was the third Grey Cup game to be hosted in Regina following the 83rd and 91st editions of the game. The Roughriders won their fourth championship with a score of 45 to 23 against the Tiger-Cats. The game took place on artificial turf, and Mosaic Stadium added temporary seating to bring the total seating capacity to just under 45,000.


This was the third consecutive year that the Grey Cup involved a team from the host city, following the BC Lions in the 99th Grey Cup and the Toronto Argonauts in the 100th, with all three games seeing the host win. This was also the fourth time that the Roughriders and Tiger-Cats met in the Grey Cup final, having previously met in the 55th, 60th, and 77th editions of the game. The Roughriders became the second western-based CFL team to win the Grey Cup at their home stadium.

Roughriders running back Kory Sheets was named the Most Valuable Player after setting a Grey Cup record by rushing for 197 yards and scoring two touchdowns. Slotback Chris Getzlaf, also of the Roughriders, was awarded the Dick Suderman Trophy as the Most Valuable Canadian.

As the designated visiting team, Hamilton called heads for the coin toss. With the toss turning up tails, Saskatchewan deferred their choice to the second half. Hamilton chose to receive the ball to open the game and Saskatchewan chose to defend the south end zone, giving Hamilton the notable wind at their backs and the ball to open the game.
Hamilton head coach Kent Austin never used the scramble offence (that the Hamilton Tiger-Cats often used with great results in their two East Division playoff games, deploying backup quarterback Dan LeFevour and occasionally even number three quarterback Jeremiah Masouli to run the scramble offence, temporarily leaving starting quarterback Henry Burris on the sidelines) on even a single play in the entire Grey Cup game.

Saskatchewan quarterback Darian Durant started the game off poorly, fumbling the ball twice during Saskatchewan’s first two offensive drives of the game, with the first being self-recovered and the second being caught by Saskatchewan running back Kory Sheets and carried for a 39 yard gain. Hamilton opened the scoring early in the first with a field goal by Luca Congi, but Saskatchewan quickly responded with a touchdown pass from Durant to Geroy Simon to make it 7–3 for the Roughriders at the end of the first.

Saskatchewan opened the second quarter with a field goal to make it 10–3, and Saskatchewan running back Jock Sanders scored a touchdown to put the Roughriders up 17-3. Following a turnover by Hamilton quarterback Henry Burris, who missed a snap and allowed the football to shoot past him, Sheets scored his first touchdown for Saskatchewan to extend their lead to 24–3. While Hamilton would score another field goal before the end of the quarter, a 42-yard pass from Durant to Simon at the end of the quarter put the Riders up 31–6 at half-time. The 24-point performance by the Saskatchewan offence ranks as one of the best single-quarter performances in Grey Cup history.

The third quarter opened with neither team able to sustain a meaningful drive until near the end of the quarter, when Burris ran the ball 18 yards for Hamilton’s first touchdown of the game. That would turn out to be the only score of the quarter, although Hamilton scored a field goal in the first play of the fourth quarter to make it 31–16 for the Roughriders with fifteen minutes left to play. However, Hamilton was unable to translate its momentum into another touchdown, and with five minutes remaining in the game Kory Sheets scored another touchdown for the Roughriders to extend the Riders’ lead to 38-16. Saskatchewan forced a turnover on the following Tiger-Cats’ possession which quickly led to a touchdown by Weston Dressler to make the score 45-16. The Tiger-Cats would close the scoring with a touchdown by C.J. Gable, but it proved to be too little as the Roughriders allowed the clock to run down and won the game with a final score of 45–23. 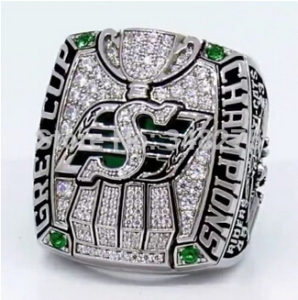